I had two invitations from the BCF early in 1968 to manage the team, one for the Tour Of Morocco and one for the Peace Race, Berlin-Prague-Warsaw. The team for the Moroccan tour was
Masseur would again be Neil Walsh, my mate Bert Humphreys was coming as mechanic. Early in March we arranged a training weekend in the Lake District, Geoff Wiles came up from Kent and stayed with us at Toton. 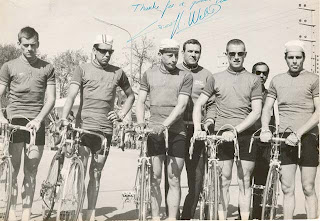 1968 - Brian Jolly, Pete Smith, Geoff Wiles, Alf, Dave Nie and Andy McGee
On the Saturday Geoff and I set off and  picked up Pete Smith and Brian Jolly who had been in a race at Newark, then on to the Lakes where we were  staying with Mrs Edmondson at Wolloway Farm, near Penrith. Neil Walsh and Andy McGee joined us  from Glasgow. Mrs Edmondson welcomed us  with a drink of wine whereupon Neil produced a bottle of Scotch for the lady and himself (Mrs Edmondson was a native of Arbroath) Neil poured her a large ‘noggin’ she asked should she put anything in it, No said Neil just put your finger in it. We had dinner at a local hotel called the “Sportsman” taking Patsy, Mrs. Edmondson’s daughter and her friend Mary with us.

We had entered in the “Red Rose” Grand Prix” starting at Maryport the next day, the course took us round part of the Lake District and the team pulverised the opposition by taking all four places. We returned to Wolloway for a mid-day meal, but on our way back from Maryport the 1800 Austin blew its top hose. We could not get a replacement anywhere, we did a temporary repair, Alf Edmondson gave us a 5 gallon can of water, and we stopped religiously every 20 mile to top up the radiator and limped back to Long Eaton. Still  - we had a good weekend getting to know each other.
The details of the race were late coming, to speed matters up I rang the Moroccan Federation, I got the phone operator to interpret for me, and she informed me that tickets and all information were waiting for us at Charles de Gaulle Airport. As the race was due to start in a weeks time I rang all the lads, Neil and Bert, then I rang the BCF, they had known all along that our documentation was at  Charles de Gaulle Airport but had  forgotten to tell us! (after all, we were only riding in the race).

The BCF arranged flights to Paris where we joined up with the rest of the international crowd. The charter plane was late getting in to Casablanca, after customs we were herded in to two coaches, accommodation had only been arranged for 4 teams and so the French, Belgian, Russian and DDR teams were dropped off at the swank Atlantic Hotel, our coach then went round hotels in Casablanca to try and get accommodation for us, the Poles and Yugoslavians, eventually finishing up in a Arab Hotel near the Kasbah, a good start we thought. However this hotel turned out to be very clean, the food was good and they found a nice bright room for Bert to work on the bikes.
The race authorities came round to see us, saying they had found another hotel for us, we liked it at this Arab Hotel and the three teams elected to stay there. A young Arab lady was in charge of the hotel and she spoke impeccable English (it appeared she had been on a student exchange visit to Llanidloes in Wales and had been treated very kindly by the family she was boarded with) she reciprocated this kindness by helping us. First she asked to see the route the race was to take, on looking at it she stated that food would be in short supply especially in the mountain region. She advised us to buy tinned chicken, cheese, jam and tinned fruit, this we did and by God was she proved right. An amusing incident happened before the start, we all went to the bank to change money, we all changed £20 (as we were in Morocco nearly four weeks) except for Andy McGee the Scotsman – first at the counter he said much to our mirth that he had better change a lot whereupon he changed £5, this was to last him a month.

We were introduced to our Arab driver, he was a royal looking Toureg, six feet tall with flashing eyes, every inch a gentleman. He had a Peugeot 404 Diesel - ideal for  Moroccan highways, which we would discover  later. Just before we left our hotel to go down to the start, an Englishman came to see us, he had been unable to find us before because we were in the Arab hotel. His name was Mr. Frank Barber OBE. Legion d’ Honour, (Italian) and he was a prominent local business man with an export/import and insurance company, he spoke fluent French and Arabic.
He had been awarded these prestigious decorations for helping the then recent disaster  that had struck the ‘Lacania’ – the liner had caught fire near the Gibraltar Straits, the survivors being landed at Casablanca. Frank had arranged for passports and clothing at his own expense, for both Italian and English passengers.
We were the first British sportsmen to compete in Morocco and Frank was eager to introduce himself and make our acquaintance. We arranged to see him on our return to Casablanca in fourteen days time.
Posted by Alan Buttler at 21:04