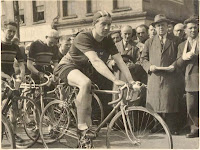 The next day was to be the mountain stage i.e. Cork via the Boggeragh mountains and so into Killarney to finish at Limerick. We bought food in a delicatessen in Cork, Brian Robinson and his Huddersfield team were also there and I overheard them saying they were going straight from the start gun in Cork. I relayed this information to Tom and the other members of our team and we made a plan to ‘go’ with them.

Sure enough from the start we “went” - Eric, Reg and I from our team, with Brian Robinson, Haskell, Gran Hayley and Tom Oldfield from Huddersfield R.C., Willy Long, Jack Ryan and Shay Elliot from the Dublin Wheelers. In seemingly no time at all we had 10 minutes lead on the main field. It took our manager Tom, miles to catch us as he could only obtain a 125cc Motor Cycle. We were expecting food and drink from him as we had ridden quite a few hard miles. Much to our surprise he was hopping mad with us for leaving Bren in the bunch (I.e. Race Leader) but we had known that Bren would not be “going” well as he had refused breakfast – as, we discovered the reason later - he was a devout Roman Catholic and the day was a fast day. 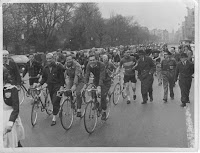 We, at that time on the race, were race leaders and all the information we got from Tom was to stop working, we like fools did this , much to the annoyance of the rest of the “breakaway group”. We did not stick this abuse long and we started to work again but on a mountain just before Killarney I was dropped. After about ten miles on my own I was caught by a chasing group which contained Dicky Bowes and his Solihull lads, I managed to stop with this group when we caught the leaders just short of the finish at Limerick. The stage was won by a lad from Liverpool, he was one of the McIntyre brothers the others being professional boxers, we finished well up but out of the prizes, we had also lost the purple jersey this going to Shay Elliot.

We again had good accommodation the evening meal being held at the Town Hall where we had at least three helpings of roast beef, none your modern pasta meals for us. Quite a few lads had saddle boils we were all walking like “cowboys” worst of all being a lad from Surrey named Don Ford , he was in real agony. We were up as usual for the last day of racing i.e. from Limerick via Naas to finish on Wood Key outside of the Guinness factory in Dublin. It was a fairly easy day, Eric and I did breakaway at Naas but were soon caught as we were close to the home of Joe McCormack; we had promised him we would let him lead the group through his home town.

We were soon in the city of Dublin and I have never seen so many people at it was estimated a quarter of a million people saw the sprint down Wood Key, every flat top building was packed with people; they were up lamp posts and down Wood Key thousands of kids were sat on the pavement kerbs and we were sprinting for the line down there, luckily there was no tip ups. The whole of the Ryan family was there to meet us and we were overjoyed to see them. In the evening the meal and prize giving was held in one of the best hotels in O’Connell Street, I think it was the Royal right opposite the Post Office of 1916 fame.

We obtained several photographs - some of which Bill Henshaw still possesses I hope he will lend us some to put in this story, we caught the boat next night and so drove home, we did stop once at an all night petrol station in Bangor, Tom had to put gallons in his Humber, then it was the turn of the Bedford, whereupon Lew Barker leapt out of the Humber shouting to the petrol attendant to put a fart in each tyre and two gallon in the tank as the van runs on air it certainly was economical. So ended a most successful tour we had nurtured many friendships in the Emerald Isle.