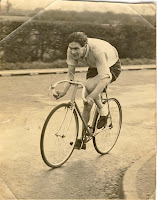 Easter 1944 soon came along, and training runs to Wales. We set off Good Friday morning going our usual way via Shardlow, Aston, Weston and Wellington and so on to the A38 where we had arranged to meet Gerry Beechinor. He arrived very late, the reason he gave us was that he had been fitting a home made “Oss” type 3 speed gear, the operating lever was fitted to the RH seat stay. Why he had to fit this gear when we were all on “fixed” we’ll never know. He had to “fix” it one gear anyway because every time he changed gear the chain derailed. The other members of this group were Bas Butler and Kenny Redgate. We had dinner at Wellington, on examining my bike I found the locking nut on my front brake had shaken off. The nearest “bike shop” was Ernie Clements at Donnington in Shropshire only two miles away. Ernie served us himself, the shop then was only a “front room affair,” he had trouble, but he did find a nut for this then modern “Ambra Superga” brake.

We carried on along the A5 passing through Shrewsbury, then on the Welshpool road, still no sign posts, and we had to be good map-readers. Just before you cross the river Severn, about a mile from Welshpool we turned left, then up the hill to Long Mynd, we were due to stop at the Welsh Harp Youth Hostel, unfortunately they could only put “Bas” and Ken up. Gerry and I did a dive downhill in to Welshpool. The road crosses many diagonal roads and when you hit one of these roads you were thrown off your seat almost touching weak parts on your handlebar stem, still with only one brake you did not stand much chance. We managed to get bed & breakfast at a Temperance Hotel. My brother Ernie had given me an ex-Royal Navy belt when he was last on leave and I was wearing it, the woman proprietor of the hotel thought I was on leave from the Navy and with this in mind we had the best food imaginable. This hotel is the now fashionable Royal Oak Hotel near the traffic lights in Welshpool. We met the other two the next morning, just by luck, as we (Gerry & I) were in the act if buying a bottle of milk from the Co-op horse and cart.

We set off towards Llanfair Caereinion, the railway started in the middle of town then, we stopped at Dinas- Mawddwy for lunch, somebody there tried to tempt us up the Bwlch-y-groes pass - good job we did not try it,. the other road is bad enough up to Cross Foxes. It was snowing and misty on top of the pass, when out of the gloom appeared a load of cyclists from Derby Mercury. These included Derek Wilkins, “Hambone” Broadhurst and Les “Flog” Hazlehurst, these were to be good mates for years. We had a chatted for a while - they were going home they had had enough of the weather. We carried on to Dolgellau where we stopped at the Aber Café (it is still in business 1999). The proprietors could not believe the food we ate, the waitress shouting to the kitchen “Another loaf for the cyclists”. In the evening we had a race in to Barmouth but we didn’t stay long as the Army were parading on the main square, they were billeted in all the large boarding houses at the rear of the square. Easter Sunday found us leaving Dolgellau and so on some byroads passing the lake at Trawsfyndd (now the site of a nuclear power station). Through the unknown byroads to Ysbt-ifan to the A5 where we turned right on to the A5 towards Corwen. We were now very tired and hungry and on reaching Pentre Foelas, Baz announced if we turned right down this narrow track we would arrive -after a ten mile ride - at a farm where we could get a good meal. We protested about the 10-mile, but he was kidding us it was only one mile, we had a marvellous meal there. Staying the night at a pub at Pentre Foulas, we had a good night.

Up early as usual we wended our way along the A5 through Corwen, Llangollen and Rhuaboin then through Overton. We knew this road very well as previous tales have told. We never mastered the route around Whitchurch area again getting lost, finishing up at Market Drayton deadbeat and hungry. Being clever I announced that things would be OK when we reached Stone as I remembered the chip shop from our previous excursions. We eventually arrived at Stone, but to the displeasure of my pals the chip shop was closed. Two American soldiers came up to us and on seeing how downcast we were they asked us the problem; we informed them how far we had ridden and that we were all “bonked” out. These Americans were terrific ambassadors of their country, we were whisked off in a lorry with our bikes to their camp and treated to a most marvellous meal of “T” bone steaks, pineapple and ice cream and the most gorgeous coffee; we had not seen food like that since pre war and even then nothing to come up to that. Contrary to all tales of the “Yanks” these where superb. We rode home on a cloud.

Hi Alan,Just come across the site,so sad to learn about Alf,I had many happy week end rides with him and the club until I joined the navy in 1944. Regards Reg.