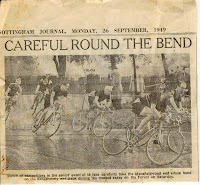 We had a good season in 1950 winning the Nottingham Track League again; I was still hopeless in the sprints but ok in the fives. At Grantham in July we won every event Dave Holmes, Blos Catchpole, Norman Casswell my brother Ernie and I. We had a job to load the car. On August Bank Holiday we again rode at Grantham this time on the football field and all our Lincolnshire relations came, Reg Morton and Jim Turner both of Derby Ivanhoe C.C. were competing, they were really going well, they beat us in the 1/4 and 1/2 mile events and before the 5 mile event for the large Granta Cup, they shook hands to say they would be 1st and second. They had reckoned without my wily old mate Norman Casswell, he said “When we start, let them go on the front then you Alf, sit on their wheels and I’ll follow you”, he had noticed that both Jim and Reg went slightly wide on the last corner before the finishing straight.

The track was six laps to a mile and it was late at night and the dew was just forming. After 3 laps remained there were only the four of us left going like hell down the back straight and on the last bend they left a small gap, I was through like a dose of salts thinking I had won the Trophy and the prize, when up the inside of me came Norman to pip me by a tyres width, I had been watching for him on the outside.

What a time we had in the Football Club tavern, the trophy was filled time and time again! We arrived home in the early hours of the morning. After Grantham we rode at Rainworth Colliery Sports, Ernie won the 1/4 but I was soundly beaten by Olympic bronze medal winner George Newberry (1952 Helsinki). George was another member of Benny Fosters "equipe" who took all before them. We also rode at Ollerton Colliery Sports, where we came up against that prolific winner from the Potteries Roy Swinnerton; I was determined to beat him in the "five" sitting on his wheel up till the last lap and still could not get by him. He was one of the best "grassman" in our area. Edwinstowe was another place where Athletic and grass track cycling took part. We have had some good hard events with Bill Flinders and all the other Thurcroft lads; Jack Atkinson was another all rounder on road or Track, Brodsworth lads with "Bill Brown and Arthur Maxfield, Sheffield Phoenix with Laurie Dodd, Ron Moore Jim Postlewaite, were also part of this "circus". In the Birmingham area we had the great Tommy Godwin and N.W. Brown of the Rover C.C. they had a terrific pursuit team, we rode against them in a round of the British pursuit championship, the venue being that great little "Velodrome" the Butts at Coventry.

The meeting was part of their track league and we rode in all the events, got lapped in the pursuit, then Norman & I finished 1st and 2nd in the five mile only to be disqualified because we did not come from Midlands centre, this was the second time this had happened. Also coming on the scene especially in circuit races like Nottingham Forest and Esholt Park (Bradford), Dartmouth Park (West Brom) and Sutton Park where there was a compulsory 6am start. Bill Henshaw, Alan Prentice and I rode there. We had to be up well before 5am then a quick dash to Sutton Coldfield in the trusty Morris Eight

This car was a marvel; the spare wheel was fitted upright in the boot. A big strap was tied round the spare, the boot was then closed with the buckle and holed end out of the top of the closed boot door, with the front wheels out one bike was tied to the rear bumper, then the next bike was put with chianwheels either side the other way round (upside down) five bikes could be fitted this way, three front wheels tied on the front bumper and one wheel inside, Five men where inside and we were off. The Solihull club were going well then with Dicky Bowes, Bob Maitland, Dennis Moreton, Stan Jones, this four eventually formed the great Concorde R.C.F. Les Wilmot and Johnny Chance of the Midland were two other good riders, these riders represented England many times and eventually would ride in the "Tour de France” for the B.S.A cycle team.

You will notice that most of these riders took part in all types of events from little unknown grass tracks (where the prizes were good) to places like Herne Hill and Paddington and Fallowfield as well as road races and hill climbs, the N.C.U and the League were sending teams abroad with quite a little success. In 1952 Ian Steele had won the "Warsaw-Berlin-Prague" East European classic with his team riding for Viking winning the Team event. Percy Stallard was Manager with the great Viking rider Bob Thom with the hardest job in a stage race "the Mechaniker”.