First stage was from Casablanca to Safi, a town on the east coast, our car soon came in to its own. One of our riders was in trouble and waving for us to come up to him, we got the OK from the Chief Commissar. The road at that time was narrow, but each side of it was a rough path, our driver in his trusted Peugeot shot up this path and was with our rider in no time, he had a slow puncture, Bert gave him a wheel and very quickly he was back in the bunch. Memory fails me as to who won the stage, but we were best team. The 230km stage had been slightly undulating all the way with no breakaways. Accommodation here was quite fine and the food at a restaurant was good and plentiful.

The next days stage was shorter - from Safi  to Essauquira 128km, no hills of note so another bunch sprint, our riders were prevalent but not risking any heroics, we had twelve days to go yet. Again accommodation was OK and food alright, I helped Bert with the bikes after I had given the lads a full body massage. Some weeks before we left England I had mentioned to  Kathleen a potential problem we would have in these hot climes, that of saddle sores.  She wondered if a barrier cream – Siopel – that they used in her hospital might help and ordered a 500g jar from the chemist in Sawley.  This cream was ideal for the environment of Morocco and for the first time in any race we had no saddle boils or even any sore bottoms, (thanks again Kathleen).

Still on the east coast and the weather brilliant we travelled from Essquira to the well known seaside resort of Agadir, the terrain was fairly hilly and towards the finish we managed to get Geoff Wiles away with a top class Swedish rider Joseph Ripsell, Geoff was narrowly beaten in the sprint by a wheel. The other three were in the next leading group giving us the team award. Geoff due to his high daily placing held the green points jersey. Unfortunately in the final sprint for the line Pete Smith touched a wheel and fell heavily. 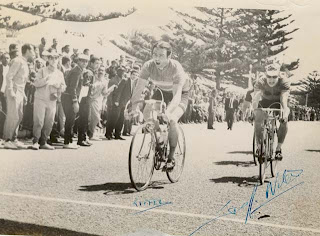 Ahmilod our terrific driver and I took Pete up to the hospital, this was situated on a mountain overlooking Agadir. The sister in charge was German and she soon had Pete sorted out and declared fit. I asked here how she had come to be in charge of this hospital, we were then told of the horrific disaster that befell Agadir in 1956. The weather that spring had been bad and coupled with melting snow caused an avalanche which engulfed Agadir wrecking their houses and killing hundreds of people, eventually dumping all the debris in the sea. This nurse had volunteered to come out to Agadir to help, and liking the people and terrain so much she had elected to stay.

We left the hospital and joined the rest of the team at the showers. They greeted us with “ How do you do it?  we cannot go anywhere without meeting someone you know !” - two Canadian girls on their way south in a land rover had seen the promotional  posters that a race was in progress and they had stopped to view. One of the girls was none other but Ginette Vachon from Quebec, she had been to the Rover factory in England and had this jeep-type vehicle converted in to a caravette. After we had dinner and massage the girls came to see us and took us out for drink in a small “estamina”. When the time came for us to leave, we could not find the Land rover, what a laugh - and they were going over the Spanish Sahara later on that week! After a search we found the vehicle and they took us back to the school which was our lodgings. Goodbyes were said and off they drove. (we had a postcard later on telling us about the trip, they were recovering in the Canary Isles)
Stage 4 - Agadir to Taroudant


By now our team were hitting their top form and rode in to Taroudant from Agadir only 80km and very fast, Brian Jolly won the stage with our other four 3rd, 4th 6th and 8th. We were easily taking the ‘overall team’, Geoff had the ‘green’ points jersey, Pete Smith the ‘polka dot’ mountain jersey and all were well up on general class. 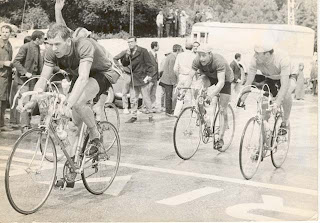 After dinner and massages I helped Bert with the bikes so we could finish early - we had an invitation to meet the chief of this lovely walled village in his palace. Rounding a corner on our way a bunch of kids came hurtling towards us, they were enacting the bike race and were using bent heavy copper wire shaped in to handle bars, aping the riders, it was both funny and sad. Obviously they had no chance to buy a bike. We had mint tea at the palace and were entertained by an Arab band and men dancing -  Dave Nie joined in, we had a terrific time , relaxing and taking our minds off the race. After the dancing we were invited in to the Chiefs large black tent. On a spit turning in the centre of this huge low tent was whole goat. We had a terrific meal, each of us pulling off the meat we liked using only our right hand as tradition goes. The Chief offered me the delicacy of the evening, sheep’s eyes. Not wanting  to give any offence I accepted graciously and then  swallowed them whole, at the same time praying that they would slip down my throat without getting stuck and choking me! We slept well that night, woken of course by the loudspeaker at the Mosque calling the people to prayer (5am).

The next stage was one we were fearing, on leaving Taroudant the road gradually climbs to the top of the ‘Tizi n Test’ summit at 7500 feet, reached after 62 miles of climbing. Pete Smith in his first International road race won the prime, a terrific ride, he had about thee minutes lead on the strung out bunch when disaster struck - he punctured both wheels. As we were changing wheels the race leader Kurt Soederland came past with two more of his team mates, he also punctured but his car being way behind he changed his own tyre with his spare, (carried by all riders due to the terrain). Riders were having trouble right and left, the reason being the road was good on the seaward side but over the summit it deterioted in to sea-bed boulders and small stones (this was due to the bad winters they had to contend with on the Marrakech side). 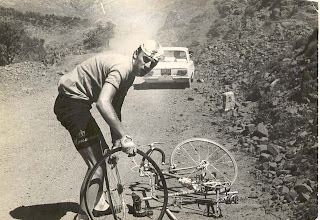 1968 Tour Morocco, Kurt Soderland punctures both wheels on the Taroudent – Marrakesh stage
Our other four  riders breasted the pass, we opted to wait for them as it was obvious we were going to have trouble. Altogether we had twenty punctures, Bert at the back of the team car having hell of a job sticking tyres on. We eventually ran out of tyres, but fortunately  we caught up with the Rumanian team, and luckily I knew the mechanic from the Peace Race, he lent me some ‘Barum’ tyres, and for the last 80 miles as the road improved we, the Romanians and us, chased hard hauling other riders in. We eventually made it to Marrakech, but we had lost all our leading positions and the points jersey, but Pete Smith still held the ‘polka dot’. 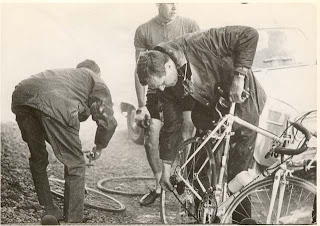 1968 Tour Morroco, Pete Smith punctures both wheels on the summit of the Atlas Mountains
We had good accommodation and food in Marrakech and the following day was ‘rest-day’, so we were able to have a good look round this ancient city, of special interest is the market place where I think you could buy  anything. There were snake charmers and an open air cinema, little workshops making all sorts of trinkets from brass, leather shops making super suitcases and of course coats, it was a cacophony of unusual sounds. During the meal on the rest day, the Swedish Team manager who I had met in Sweden came over to discuss tactics. His rider Kurt Soederland held the ‘Mallaout Jaune’ if we would help him retain this jersey they would pay us 1000 dirhams (about £90), they - the Swedes - would also help us to win stages. We could not lose and although collusion carried a hefty fine, we accepted.
Posted by Alan Buttler at 17:53