It soon came to late August 1964 and our return trip to Canada. The team had 2 changes -  John Geddes and Bill Holmes being replaced by

Benny Foster was again manager, Bill and Pete were riding for Harry Quinn  their equipment therefore identical, John Woodburn’s bike I knew and Arthur Metcalf had similar equipment. The only problem was wheel interchange, I could sort this out in Montreal. We took the same route as the previous  year i.e. train and boat to Amsterdam then riding our bikes from Amsterdam to Shcipol Airport. Again we had an uneventful flight but still on a piston type aircraft. This time we landed at Quebec which cut the flight time by about and hour. Huge crowds lined the route to our college, the French Team leading the way with their tricolour proudly flying. This was the time of President De Gaules attempt to get Quebec under French rule. Some weeks later our sovereign Queen visited Quebec and got a cool reception. 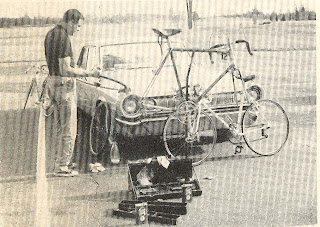