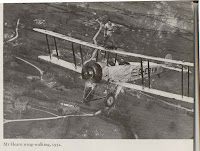 Almost forgotten in the thirties was the appearance of Air shows, first we had Fruity Yates and Red McKay, flying an Avro Trainer and a Bristol ex World War 1 fighter. The Avro was used for cheap flights ‑ i.e. only one passenger at a time, the Bristol being used for stunt flights never to be seen again. This all took part on the then so called flying field which is now a Wimpy housing estate, half way along Wilsthorpe Road, later years saw the arrival of Sir Alan Cobham’s Air circus which until 1935 included the De Haviland twin engined plane which, with Scott and Black on board, had recently broken the record for the flight from Croydon to Australia in just over two days. Also in this marvellous show was an early helicopter, 'Cierva Autogiro' and a 'Handley Page’ ex Imperial Airways "Hannibal" ‑ a very large passenger plane. The show also included a De Haviland. Rapide and many small planes such as a "Gypsy Moth" (flown by Chichester on his round-the-world flight). Red McKay still did his stunt flights - a never to be forgotten scene and never to be repeated. It is little known that Sir Alan Cobham was the inventor of in‑flight refuelling.

Football, which had taken hold of me when in hospital, was now a passionate past time. I had picked Arsenal as my team but in 1933 my Uncle Bill who lived at Derby, took me to see Derby County play Arsenal. I was looking forward to seeing my team run out in their crisp red and white strip as seen on coloured photographs. What a disappointment I had when they came out on the then grassless Derby pitch, the red had run into the white so they had pink sleeves. They looked terrible. This team hadn't been beaten that season, but Derby put paid to that beating them 3‑0, Hughie Gallacher scoring a hat trick. It was still good to see in the flesh Arsenal’s Ted Drake, Alex James, Eddie Hapgood, George Male and the Derby side Sammy Crooks and Dally Duncan. I changed my allegiance to Derby from then on and am still a great fan. In fact when I was taking part in the Warsaw to Prague bike race in 1963, I was to meet the whole team when they were playing East Germany in Leipzig (Derby won 3‑1. but more of this later). I'm forgetting we are still at the end of 1938.

After our Hawick trip we settled down to weekly club runs. We had an excellent ‘run’ secretary in Rueben Hutchings. He took us to all the lovely scenic places within an 80-mile radius of Long Eaton. We visited most of the Youth Hostels in the area ‑ especially those in the Peak District, which was to become the first National Park in the land. Late in 1938 Fred Hillier and I were challenged to race in the final event of that year, a 25 mile Time Trial, we were told wrongly to take our time. I sat up all the way to record 1 hr.16 min 58secs. I could have beaten that easily. This event put us off racing for another two years, if only we had been encouraged then. Still we continued touring and Youth Hostelling all that winter. Later in October 1938 we went to see the Long Eaton C.C. hillclimb this was won by Les Thompson in 1 min, 31 secs. I vowed at that time that I would one day ride that hillclimb. I did so in 1946 when my own Long Eaton C.C. in conjunction with South Yorks ran this event. The distance had been extended and I won for L.E.C.C. with a 1 min. 39 sec., and North Derbyshire NCU rider Cliff Beldham took the title with a 1 min 31 secs. This rider, together with Bill Day, Talkie" Ron Moore, Bill Dodds and George Postlewaite were to be our big rivals in Grass Tracks throughout the next few years.

1938 started with war clouds gathering, naturally no-one wanted war and so when Neville Chamberlain came back with his “bit of paper” from Munich everyone rejoiced at this! The autumn of that year Mr. Rogers, who was headmaster of Derby Road School, persuaded me to attend his “Keep Fit class” which was held every Monday and Thursday evenings at 7 p.m. It had taken a few weeks to persuade me, as I was very self-conscious of my thin calves due to years of plaster of Paris clad legs. However I attended. Looking back and with the benefit of hindsight, Mr Rogers psychologically gave me a lift, as I found that my abdominal muscles were superior to anyone in the class. He had me on the ‘rings’ and I was able to hold my legs out straight for minutes on end. I could sit on the floor and raise my bottom off the ground with my legs outstretched, climb the ropes using hands only, with legs straight out all the way to the roof and back, for once I could do something that no one in the class could do, most of the cycle club attended. After the class we all trouped to the “Grimsby” fish and chip shop. We sat at tables, which had glass tops, one of which was broken with two pieces left on the side. We proceeded to repair this table top, the last piece going in with a loud bang, whereupon the Proprietor picked up a large carving knife and chased us out of the shop. He did have the good grace to apologise to us the following Thursday night as he noticed we had repaired the table.