The race started in Dublin on a Thursday morning, there where 140 starters. We rode down the 6 miles from Dun Laghaire to the ceremonial start on O’Connell Street in the centre of Dublin. The start proper was another19 miles very close to Bray. We all had a ‘pee’ then the lead car dropped to tricolour and we were off. Reg, Eric and I stayed near the front, just like we did on the track. There was a prime at Gorey which was won by Eric, he also won primes at Arklow and Enniscorthy, in no time at all we were on the outskirts of Wexford in sight of the “five mile to go” sign, there was a mass sprint all four of us were in the first twenty but not in the prizes.

Our digs were terrible, four small beds in a room you could hardly sling a cat round. The evening meal was held in the best hotel in town all competitors and officials eat together, the fare was first rate. We were soon in bed, woken by Tom early the next morning. We went down for breakfast the woman was cooking over an open fire , the porridge was awful all black sooty bits in it . The bacon and eggs were the same the eggs being blackened, We - Eric Reg and I ate ours but Bill, Bren and Tom would not touch theirs. We checked over our bikes had a quick rub down with embrocation, packed our bags for the luggage van and then donning track suits we went down to the headquarters hotel where Tom managed to get us another breakfast. Good job he did for we had a long way to go to finish at Waterford, we bought fruit etc for our feed during the long stage which took us inland to Kilkenny and then down into Waterford.

Again Reg, Eric and I were in the front group for quite a while. When on the way near Thomastown a donkey cart ran into the peleton , the damage done was unbelievable our team managed to avoid it but those at the back had a hell of a time. In fact quite a few were injured and packed. Ted Gerrard (later to tide in the Peace Race) smashed his bike so bad he managed to make one machine out of three and finished well inside the time limit. Dave Duffield who comments on this event in his Tour de France spiel with Eurosport may well recall this smash as he and Dave Keeler were involved. About twenty miles to go Eric and I went to the middle of the bunch to find Bill and Bren, we sent Bren up front, by the time we got back to the front of the peleton a break had occurred and we could not bridge the gap. We were elated at the finish as we learned that Bren had won the stage and was to wear the Purple race leader jersey. 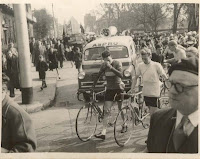 Our “digs” in Cork were first class, we were in the “Headquarters Hotel” and were entertained by the De-Lacey family who at that time ran the Irish Dunlop Rubber Company, we had a most marvellous meal laced with the best wine and champagne, Reg Morton taking a real shine to Miss De-Lacey.