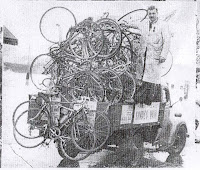 The team decided to start the next day as we remarked that would be what Dennis would have wanted. The strange thing was that our remaining three had packed a black vest in their kit and they rode in these. As Derek and I stopped behind to meet Dennis parents, all the other team managers promised Derek and I that they would give every assistance to our team. We met Dennis parents at Cobh station.

Mr & Mrs Weston had quite a story to tell us, the police in Long Eaton helped them with their heartfelt sympathy, arranging all travel details and custom formalities, on the station at Long Eaton two Irish girls by the name of Daly who lived in Nelson Street, were going home to Dublin for two weeks holiday. They befriended the Weston’s, seeing them safe on the boat at Holyhead and also buying them berth tickets to enable them an easy crossing. On arrival at Dun Laughire, the sisters escorted the Weston’s to Dublin, then bought them tickets to Cork and accompanied them both down to Cork, they were real good Samaritans. The Irish Cycling officials were also first class, looking after all hotel and all funeral expenses.

After about half an hour with the Weston’s we bid a very emotional farewell as we had to catch up with “Tour”. Earlier before the start the weather had changed from summer style to just above freezing. One Irish rider had been taken to hospital and advised to stay overnight for suspected sun stroke. He discharged himself to carry on in the race, then on this particular day he was sent to Dublin hospital and admitted with exposure! We had given our spare jerseys to our three riders, leaving us with just our “Barbour” suits - we were so cold, we had to stop at Kilkenny for a rum apiece! At the bar stood an Irish farmer and before we could get to the counter he had bought us two double rums, he refused all payment saying he had never seen anyone so blue in all his born days. We had two more rums before our chase began.

We began to come across team cars loaded with riders who had succumbed to the cold conditions, in one car was our three, they said that they were sorry they had to give up, but not having any gloves they could not apply their brakes. We left them to see who was left in the race, we caught the first small group who wanted a time check on the leaders. We went off to catch the leading group who had 6 minutes on them. We clicked the stop watch then stopped at the end of a farm drive where a small family were awaiting the race, we told them the news. We noticed that the lady in this group kept going back to the farmhouse. I thought she must be fed up of waiting for the rest of the race to go by, but after a few minutes she returned with a tray with coffee and fruit cake for us two Englishmen. What a super gesture, these Irish people are the salt of the earth.