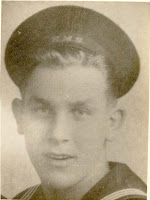 In 1945 my younger brother Ernie had been demobbed from the Royal Navy, he had been stationed on a Tank Landing Craft. After disembarking their tanks on the “D” day beaches at Arromarche their engine broke down and they were caught in the post “D” day storms for three days before they where towed back to Poole Harbour. He was later sent to India, but on the dropping of the atom bombs on Nagasaki and Hiroshima their landing craft became obsolete, the Japanese surrendering.

My Dad sent Ernie to manage the College Street shop. The house at the rear of this shop also became vacant and shortly after this Ernie got married and lived there (He is still living there and raised two daughters and one son there. His son, Alan who is now a an International Bike technician with the US Postal team, which includes (1999) Tour de France winner Lance Armstrong, now runs that shop.

The previous year, my youngest brother Alan had been called up to the Fleet Air Arm and after several months in Colchester he was transferred to Burton Wood (later to become an American Air Force base”). He came home on leave and to help him visit on a regular weekend basis, he borrowed a 250cc Triumph 250cc 2H motor cycle produced strangely enough in 1940 - we had “snatched” it back from a non-paying pre-war customer.

One day in June 1946 when we were having a particular horrible day at the shop and it was pouring rain, an urgent phone call came from the Derbyshire Royal Infirmary stating that Alan had been involved in an accident and was in Ward I. Dad remarked that that was the last straw; we had had a horrible day. We dashed over to Derby to find Alan had a gash just above the hairline and scratches on his arms (he wasn’t wearing a helmet, very few did then). He was unconscious but the nurse said he would recover and be OK. This was a rather optimistic forecast as it was soon apparent that he had fluid on the brain, he died three days later.

Dad never recovered from this blow, the trouble being that he bottled up his feelings. The funeral was a sad affair the Chapel being packed. We felt like throwing all our stock of motorcycles in the nearby canal. Of course life had to go on. We went up to the top of Swinscoe hill near Ashbourne where the accident had happened, and it was obvious that the Triumph had had a front wheel puncture and Alan, trying to control his machine, had run off the road, hitting his head on a stonewall, the bike being hardly damaged.