On our arrival in Warsaw we were met by Ian Steel , he soon made it clear that from now on he was in charge. I gave him the baggage and bike dockets and left him to it. On the bus trip to the hotel we were miserable, our team spirit had disappeared. We arrived at the now familiar (to me) Hotel Warsaw to find that Ian had lost three cases. Ironically we had travelled from London in all sorts of transport and lost none. After a search round the hotel I found them. A meal was ready for us, a communal effort with all teams in this large dining hall. It was in this hall that I heard the dreadful news that my Czech mate Milan had died and also my Russian friend Sevette, to compound my grief I also learned that ‘our’ German driver had suffered a fatal heart attack the previous week and had died in Frankfurt on Oder. I went alone to my mechanics room and quietly wept. 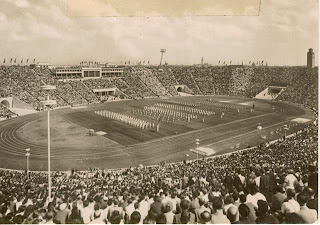 1967 Peace Race Leipzig Stadium
I very soon settled down to race routine, sorting out the menus with Ian and getting him integrated in to the great team we had, however this proved difficult as at a meeting  with the riders it was decided to share any monies won, but Ian who was in demand (owing to his 1952 Peace Race win) did not share his T.V. and radio appearance monies with the team. I suppose we were fed up of hearing about 1952 -  it was brought up with every meal, Ian’s success was a great achievement but it got a bit much after a while. I should have taken him on one side and asked  him to tone it down a bit. But as we entered another  country the whole rigmarole started again. He had of course deserved the adulation. 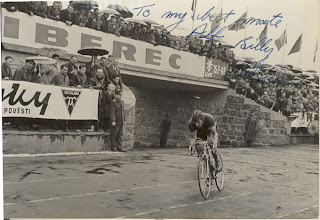 1967 Peace race, Billy Bilsland enters the Liberec Stadium with a lap to go
Unfortunately I kept no record of the route taken in this 1967 Prague-Berlin-Warsaw. The team rode well, quite a few days finishing in the first twenty (prizes were awarded from 1st to 20th place). The highlight for the team was Billy Bilsland beating the great Russian rider Saidchushin (overall winner 1962). Billy beat him in a two-up sprint in the huge stadium at Liberec Czechoslovakia. The hilly terrain suited our ride, but the weather was shocking, it rained all day. The rest of the lads finished well up and we won the Team award for the day. (a  large cut glass flower vase which they presented to me). Neil was doing his usual great job in the massage room. We did not see a lot of Ian, he was with the UCI people. 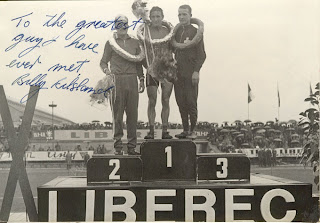 The race finished in Prague  and Ian got really drunk at the final dinner, he mislaid his prizes too and never did find them. The only other thing remembered about our return to Heathrow, was we were met by several of the boys wives or rather at that time girl friends, journalists and BCF President. We collected our bikes and luggage at South Kensington air terminus, then as we had done in Paris we bundled Neil Walsh in to a taxi and we had a race to St. Pancras station - I won the sprint up the hill to the entrance of the station (Neil had done a “job” on my feet, I was walking on air, his occupation in Glasgow as well as masseur was Chiropody). We had already said our goodbyes to Geoff Wiles who  lived in Kent and Dave Mitchell left us to go to Euston Station. Roy Hempsall Danny Horton ,Billy Bilsland, Neil Walsh and I were on the same train. Alan Lloyd had ‘packed’ in Poland saying that he was a little boy in a mans race. The break up of this team was sadder than usual as we had been together for almost seven weeks .
Posted by Alan Buttler at 21:00