The usual BCF invite came through, I was refused the managers post once more, very disappointing, especially when they chose Bob Maitland whom I had been with to Tunisia in 1960. The team was again young and inexperienced i.e.

masseur was Dennis Agnew. For once the riders were fitted with the same equipment, I only had  to do the usual wheel interchange before the start.
The route was new to me, Prague-Warsaw-Berlin, this year going right up to Northern Poland - Danzig, Gydynia and  Stettin all of which were new stage towns to me, food and accommodation in Rostock (north DDR) was in a Seaman’s Hostel and it was absolutely first class. In Berlin too the “Digs” had changed from a poor college to the Hotel Berliner which was a new skyscraper building. I cannot remember much about this particular tour, except Billy Bilsland rode well he being only 19 years old, Ray Barker finished well, Ken Kipping finished although well down, (he had suffered with  bronchitis nearly all the race). Barry Lawton in his first International also finished but Dave Nie on his second Peace race retired. Bill Townsend succumbed after the first four days in Czechoslovakia, he was completely out of his depth.
The night the race finished and after our dinner Ray Barker and I  decided to go over to look at West Berlin, we were close by Check Point Charlie, the DDR guards were very kind and efficient. When they knew we were on the Peace Race they enquired of the well-being of Stan Brittain, Ian Steel and Bill Bradley, that’s how big the Fridensfaht is in DDR. We crossed the bridge to the American sector and we were treated to some harsh questioning  by a young American soldier, he was calling DDR all the names you could think of and I politely asked him if he had visited there and to my amazement he said no. We had a quick look at the shops and returned, quite an experience really.
The race finished in Berlin, the Race Dinner and dance being held in the Sports Halle (Hitler and Goebells made many speeches here). The famous woman pilot Hannah Reitsch flew an early helicopter inside  this hall, so you can imagine the size. I was mysteriously presented with a Gold Medal by the President of DDR. – which to this day I don’t know what it was for. During the dance Tave Schur came over with his wife to congratulate me, I was overawed. (Kathleen and I were to meet Tave and family at their home in Magdeburg in 1973), This night at the Sports Halle was the best I ever experienced in Germany, it was wonderful, we danced the night away, Ken Kipping disappeared with his ‘new’ girlfriend and we did not see him until early the next day. 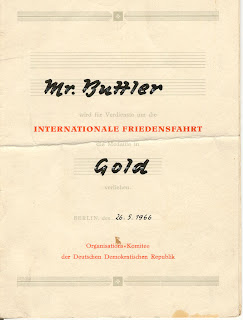 Also staying in the next hotel to us on Frederickstrasse was Ipswich Town F.C., they had just won the 1st Division Championship in England and were celebrating with a ‘footballing holiday’ in DDR. They had played in the stadium where the race had finished the previous day. They were going out that night asking me to meet them at their Bulgarian Hotel, I didn’t have much deutschmarks with me. As I have previously stated -  each team member and official is presented with a book containing tickets for meals and dockets for beer. As none of our party had used any of the drinks dockets, I tore them out and they were taken as money for any drinks consumed, naturally I was  in good books with the team. It was a treat to meet their chairman Mr. John Cobbold and the players Phillips and Galsworthy etc.
We finished drinking in the hotel and I was about to leave them when they decided we should all go to a night club a few doors away. This turned out to be quite a good place, the interval came along and much to my astonishment when the band retired, some of the Ipswich Town players took their places, accomplished musicians they played ‘Glen Miller music’ and it was terrific. The original band was irate and after a few numbers they were turfed off. I got back to our hotel with half an hour to spare before we caught the plane home. Luckily I had got the bikes and bags already to board the transport for the airport. I saw the bikes on board this snazzy British Airways flight (we were going home via Copenhagen) and I slept all the way to our destination where we changed in to  a Pan American “Clipper”. Bob Maitland said I was in no state to check anything and he would take over seeing the baggage and bikes on to the American plane, I could not care less. When we had settled down in the plane the air hostess introduced us as the English Cycling Team arriving from Berlin with such a tone  of disdain as though a Communist country had the plague. We arrived at Heathrow O.K. but Bob had lost two bikes, Dave Nie’s and Barry Lawton. It took a fortnight to get them from Copenhagen.
So ended another trip to the “Peace Race” , this being  my sixth, but unfortunately the English teams were getting worse the reason being that the best riders were being selected for the British Milk Race, - I said before it is still and honour to finish in this Great Race.
Posted by Alan Buttler at 20:35