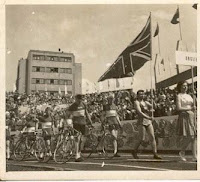 We had two days training before the start of the Peace Race, well three days really as on May 1st we all attended the May Day parade, I had done all the bikes over as soon as we arrived, making wheels interchangeable was the hardest part, hub and freewheel spacers being the biggest job. On our second day the team prepared to go out training,

“Why don’t you come with us, we are only going for a steady ride” I was asked. Like a fool I borrowed a tracksuit from that stylist peddler Ron Jowers, got the spare bike out and off we went. I was off the back after the first hill and we were still in Prague. Previously we had arranged to meet on the main road east should anyone get dropped and turn at Lidice. I struggled on my own, in the distance I could see the rest of the team who had halted at a plaque on the side of the road. As I came up to the group Ray Booty shouted –

“That’s for putting me in the tennis courts at Long Eaton Sports 6 years ago!”, he has a memory like an elephant. The plaque they had stopped at was to state that this was the furthest General Patton had got to before he was stopped by Eisenhower; Prague was freed by General Vlassow’s Army, political lunacy. There I go again, right off the subject.

We were riding then in 1955 for Anglettere so our numbers were 1 to 6. The team was:

Stan Brittain came a day later than us due to difficulties getting a Czech visa the authorities thinking his name was propaganda. After the training spin the riders had a massage with Bill Shilliber, no such luxury for me - I fell in the bike room then sorted out whatever problems there were.

The following day was May 1st. we were taken by coach to St Wencelas Square then into an office on the 3rd floor where we had a super view of the parade, after the military it became more peaceful, we were there at 8 a.m. and it went on all day - must have stretched miles, contrary to all opinion at that time, we were allowed to go as we pleased and we had a super time. After the parade, medical examinations were carried out, checking heartbeats (Ray Booties heart being the slowest at 45bpm) Blood group was also taken and a gold wrist band supplied with the group engraved, good idea really.

Back at the hotel we had a team talk. On a free ride with the team was the President of the N.C.U. Mr Taylor, presidents of most entered countries were there as this was the first Peace Race under the auspices of the Union Cycliste International. The team had originally been picked by the British League of Racing Cyclists (B.L.R.C) Ron Jowers being the only “league” man there. At the evening meal a rather amusing incident occurred, Ron Jowers had bought with him a bag of special tea. He asked our waiter, using sign language, if he would make him a cup of this special, the waiter eventually came back with three massive jugs full, he had used all the tea which Ron had bought for the whole trip, I have never seen any one so mad, the rest of the team were paralytic with laughter.

The morning after our training session we were invited to a training camp for athletes and we were very honoured to meet Emile Zatopek, the double Olympic gold medal winner at London and Helsinki. He was a good ambassador and showed us all the modern training equipment, he also presented us with Dukla Prague sacks, just right for track suit and slippers.

The night prior to the first stage we were provided with large luggage bags that held our suitcase, this was to prevent any damage. They had to be packed the night before any stage apart from rest days of course, these were labelled with the owners code number and were collected early in the morning and taken by lorry to the next stage and were in your hotel room when you reached there.

Also appointed by the organisers were interpreters, our manager had these running round like the proverbial “flea in a fit” and I was embarrassed. Each country i.e. CZ, DDR and Polska allocated an interpreter to each team and I am quite sure they were very sad to leave the teams at each border point. Some of the interpreters became real friends - especially those who we were to meet up with each year. On arrival in their country they would take over the total care of ‘their’ team, always asking of the whereabouts of riders from previous years - Ian Steel, Bobby Thom, Percy Stallard, Joe Christianson, Frank Garvey, Ian Greenfield, Ted Gerrard and Ted Jones, Ken Jowett, Johnny Welsh, the Liverpool Mercury clown Kenny Hill, Albert Hitchin, Ted Jones, Alfie Newman, Peter Proctor, Les Scales, Norman Shiel, Tiny Thomas, and Johnny Welsh.

This is all absolutely fascinating and I'll make a few more comments when I've read the whole lot.

It's just that I noticed that the Union Flag being carried in the picture of this section is ... upside down :) Could this be a sign of distress I wonder?