Here we go on another “band wagon”. It was ‘boom’ time in the shop – trade was at its best  and earlier in the year we were awarded the Honda Agency. The first firm to bring in Honda was a company called “Hondis” located in small premises in a Kensington Mews. We bought the motor cycles - C100 models - in container loads. Crated in 3’s they were shipped direct from Japan. They were fitted with winkers, battery lighting, a good flywheel dyno for charging and “sparks,” they were also fitted with very adequate leg shields and all for the sum of £69-19s-6d (£69.95) - they sold like hot cakes, we could not get enough. It was necessary for us  to buy a special ‘Tool and Spares kit’  before we could take delivery of the machines but who thought of these kits I will never know because 15 years later they were still unused. Later in the year we bought C92 and CB92 125cc models and C72 250cc models, these  were delivered two in a crate. Eventually we had a mechanic working full time  assembling these Honda machines (and later Yamaha and Suzuki). (As stated previously he is still doing this job at Roy Pidcocks Motor Cycles).
Earlier in the 1960’s the great bicycle firm of Raleigh decided to go in to production with a moped -  it was the worst model ever. Raleigh soon closed down this side of the business and the managing director of this branch moved to a new firm called Honda Motor Co Ltd in new premises in Nottingham, the representatives that were with Raleigh transferred to Honda.
Early in the year I was asked to go on the Peace Race and the Tour of St Lawrence, this information  was sent to me earlier then usual which helped me a lot -  I could arrange my work load easier. Resentment was still being felt from brother Ernie but underneath he was O.K., his wife goading him on a little. The Manager for the G.B. Peace Race Team was to be Arthur Campbell, a BCF Committee member who had been on the tour the previous year as Scottish Team Manager. I had hoped that with my previous experience  the job would be mine. I had expected to move up the scale and into management, but by now I had got the overseas cycling trips in my blood, disappointed as I was ‘mechanic’ was still an important job.
We were very busy in the shop so I was unable to travel the country to visit and get to know the team members - there were many changes from the original, word getting around that the race was too hard. The ‘Milk Race’  start date had been moved too and it was now nearer to the start of  Peace Race and all the top riders wished to ride in the English event. The team selection was finally made after many alterations,

and my special form sent out  as in previous years, duly returned and acted upon for various spares etc.
My heart was not in this 1964 event, maybe I was getting  ‘blasé’. The masseur was Bill Wood, a good man he came from Lincoln and worked at Louth hospital (where Kathleen did her nursing training). We met up in BCF headquarters in London, the riders were very young and all on their inaugural International race.
Glancing quickly over  the machines at the airport, I noticed George Bennett’s bike looked as though it wanted a good overhauling. I found out later that – hearing of my reputation - he had  brought along his ‘old’ road bike especially for me to overhaul,  - a good introduction to this North East rider! A young red haired woman came to meet us at the airport, at first  I could not remember where I had seen her before then I suddenly remembered it was Ginette Vachon from Canada, who had been sent as UCI representative and employed as interpreter for the UCI committee. Our usual interpreter met us at the airport and looked after us well as always. We were again at the Hotel Warsaw, in excellent rooms and good food. All my Russian, French, Belgian and Dutch mates were they’re each welcoming each other with bear hugs. The same German driver met me with a warm hand shake. 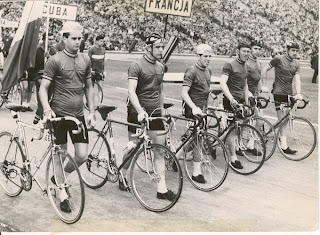 1964  Peace Race: Tony Woodcock, John Froud, Billy Perkins, George Bennett, Jim hendry and John Bettison
The first stage was  the 94km “Circuit of Warsaw” embracing tortuous main roads and cobbled streets. On entering the marvellous Stadium, Billy Perkins fell in a large accident breaking his collar bone, he was out of the race and flying home before we had hardly started. The first four days in Poland proved that out team just wasn’t good enough. Only George Bennett and stylish Tony Woodcock able to be up there in the top forty. Our team were like the 10 green bottles -, then there five, four then three, finishing up with only two. This was the first team I had been with that had  not  had at least three men to compete in the overall Team classification. Our third ‘count in man’  Jim Hendry, had packed on the tough 10th stage from Oue to Karlovy Vary (138km)  The race continued and Jim was left in Karlovey Vary, we all assumed that he would be flown home but to our surprise he was waiting at the finish in Prague – (he had been flown to Prague in a 2 seater plane, goggles, helmet and all! Jim eventually progressed to BCF National coach).  Although the work load became easier, I thought I had wasted my time coming on this particular event. 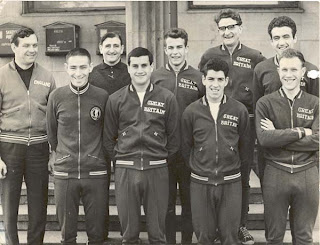 1964 Peace Race Alf, Jim Hendry, Bill Woods, Tony Woodcock, John Froud, Billy Perkins, Arthur Campbell, John Bettison and George Bennett
The highlight on this tour for me was that Leeds United were playing in the Berlin stadium  as entertainment for the large crowd. The race schedule into Berlin was way in front of time, the Leeds United players wondered what was happening when, with 15 minutes still to play, and two lead police motor cyclists roared across the pitch and stopped the game! I was later able to chat to Madeley, Alan Clarke, Jack Charlton, Johnny Giles, Sid Owen (I had  met him in Chemnitz some three years previous when he played for Luton Town, he was now coaching Leeds). 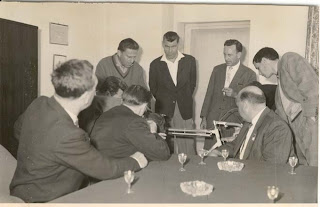 1964 Peace Race meeting to discuss the new Favorit cycle
The DDR, Czech and Polish teams dominated this years race with Jan Smolik winning from Hoffman of (DDR), with Weidman (DDR) 3rd. DDR won the Team Prize with Romania 2nd. As usual, we had an interesting sightseeing tour of Prague, visiting the castle and the Cathedral which was being restored. The event was run in its usual efficient manner. An instance of real organisation occurred before the start from the German Spa town of Aue. We were accommodated at the hospital which was 5 mile from the start. It was pouring down with rain and it had been for hours. The riders were not relishing riding down to the start in the centre of Aue, soaked before they had started.  Like a miracle waterproof suits appeared for everyone in the race, truly unbelievable. 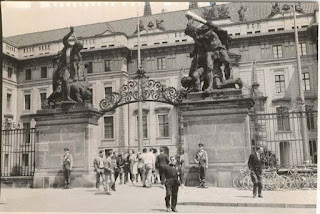 Some years later reading a book on DDR, I was amazed to find that Aue was the centre of Uranium mining during the war, the only one in Europe (it is all worked out now) and we had been staying in the Isolation hospital for people who had been attacked by Radium poisoning.
I was pleased to get home from this race, we had hardly any success although Tony Woodcock was a creditable 40th, he was actually in the first twenty up to the last day on the Ceske Budejovice to Prague Stage then went all to pieces. John Bennett was 47th, they could both be proud to finish.
Posted by Alan Buttler at 20:25

It was George Bennett who finished 47th and Alf was right it was a hard race. George Bennett by then was quite an experienced International having ridden The Tour of Britain 1961 Two Tours de France de L'Avenir and a Tour of Sweden where he finished 7th. as well as having lived in France for 2 seasons. Racing with and against Vin Denson who was riding for Frimatic and Lucien Aimar who for a while lived in the next French town, Compiegne, and competed in the same races
Alf Butler was a smashing bloke, a real Gentleman.