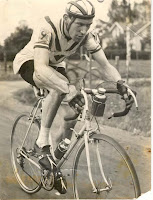 The team manager was Johnny Dennis and he was the best manager I was to go with. We left by train from St Pancras then on to Tilbury where we boarded a Swedish-Lloyd boat bound for Gothenburg. The voyage took one and half days. Stan did not travel with us as he was riding in the “Star” race in Copenhagen (he won this).. We had a talk on board ship regards tactics for the forthcoming race. Pete Ward saying we would be O.K. when we got to Orebro as his wife would meet us there and would be able to wash bottles and assist etc. I dismissed this at the time thinking I was hearing wrong, as it was unknown for wives or girlfriends to accompany their partners on cycle races. We eventually landed at Gutenberg transferred to a modern electric train to Varberg where we boarded a small steam train with an observation car, which we enjoyed enormously. We stayed in marvellous accommodation at a hotel in the woods. Food was good too and we had venison for dinner that evening. 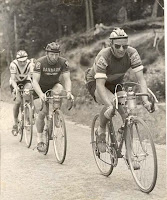 The next day we had smorgasbord breakfast which was first class, I had risen early about 5.30am to sort the bikes out, i.e. making wheels interchange etc. The team went out training thro this marvellous scenery, a Finnish masseur joined us in Varberg, his name was Arne Ludgren, and he had won a medal in Helsinki Olympics for walking. What a fabulous man he was, he did everything for the rider, with John Dennis being a good manager and me on the bikes we looked forward to a good Tour.

The race was run over six days starting in Philipstadt then round the lakes embracing Husqvarna, Motala and Orebro then up to the university town of Uppsala to finish in the Olympic Stadium in Stockholm. With two days to go and Stan leading the race, the rest of the field (all Scandinavians) attacked Stan in to Uppsala putting him back to 4th place. We had lost Pete Ward in Orebro – he had come down heavily in the tram lines and unfortunately breaking his arm. He had on previous days helped Stan by working with Owen and Doug to protect Stan’s lead.

We stayed in a super Motel in Uppsala, we mechanics working all together in one garage, I was invited to have a drink with them after our work was completed, and they commiserated at the way Stan had been ‘worked over’. Out came the schnapps and we had a great night. The last day was a Time Trial finishing in the Olympic Stadium, Stan rode the race of his life pulling up to 3rd place. (the race winner was so ashamed of the way he had won that he bought Stan an expensive leather jacket in recompense. Stan was to get ‘even’ the following year by winning the race).

Pete Ward and his wife, who had caught up this us in Orebro and had accompanied Pete to hospital following his crash, went on ahead to Stockholm to our allocated hotel. When we reached the hotel John Dennis and I found we were in a small room, we thought this was strange. We then found out that Pete and his wife had taken our room, John blew his top and soon had things changed round. Before returning to England we spent the day in Stockholm going across to the farm museum called Skansen, everyone and everything going back 100 years.

We left by train for Gothenburg then by boat to Tilbury, saying a sad goodbye to Arne who went north to Helsinki.

There was plenty of work to catch up with on my return, quite a few pairs of wheels to build and also gaining in popularity were motorcycle wheels with Dunlop and Fiamme rims. Special self-built “Triton” motorcycles had become popular - i.e. Triumph 650cc engines with Norton “Featherbed” frames and “Road holder Forks” and so the demand for Norton and Triumph parts grew rapidly, necessitating several trips to the “works”.