After missing the Peace Races from 1959-62 I received an invitation to go on the 1963 event, the team was made up of the new Independent class of rider the list being
The route  took my favourite way Prague-Berlin-Warsaw. I tried to see all the riders in various events before we left England as usual, luckily apart from wheel differences I only had  to make them interchange (spare wheels included). The team manager was a man I had not met, and he was on his first trip abroad. The masseur, S. Watson from Southport.
This team had not got the discipline of the Brittain, Blower, Bradley, Booty brigade, they slouched about in track suits, no blazer and flannels for them. Picking out the best was not difficult, John Woodburn finishing 14th overall, his highest day placing  was in the Time Trial when he achieved 12th place.  When you have been with a successful team it is difficult to adapt to one not quite so good - mind you anyone who rides the Peace Race and finishes deserves a gold medal.


On the stage in to Dresden  John Woodburn crashed. He was away with a small group and I am sure he would have been in the first three, he was going so well. He came off almost at the gates of the Stadium, both tyres rolled off. He grabbed a lady’s bike and rode over the line on that - the crowd, photographers, T.V. and  radio commentators went wild and he became an instant hero. On John’s bike I had used Barum tyre cement instead of the best at that time ‘Clement’ and as the team mechanic I was very upset at this incident, but John laughed it off. 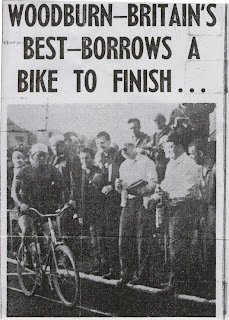 I was quite friendly with the tyre representative of the Czech company ‘Barum’, and on meeting him in Prague in the hotel, he asked me to come round to see his stock in the Barum van whereupon  he promptly presented me with 30 of their  tyres identical to Dunlop’s. The team members were overjoyed as I was able to fit these excellent tyres on their machines now. (Dunlop had stopped giving tyres to International Teams due to some bad publicity in a ‘Milk Race’ - again some official biting the hand that feeds you). Tyres were a big slice out of riders small budget. The Barum tyres were exact copies of the Dunlop No 2, 3 and  5. (5 years previously, Barum Tyre Co had asked for our assistance and requested samples of all our Dunlop  tyres, we duly obliged and they  gave us a number of their (unfortunately at the time inferior) tyres in exchange).


I got on well with John and most nights  he would come down to my mechanics room to discuss which team he was to ride with in the next stage (he could not use his own team because every day they were off the back, and 10-20 mins down on the stage winner) this does not detract from the fact that they finished but merely that they were not of the same standard as John. I am forgetting an incident coming in to Dresden. I had been informed that Derby County were playing the DDR National Football Team in the Stadium. This match was to entertain the crowd before the Peace Race arrived. It is a fairly flat run in to Dresden, and the scoreboard inside the stadium could clearly be seen -, DDR 1 - Derby County 3. I was delighted of course and not only that, all the Derby team were waiting for our riders to finish so they could greet them, they had been told of the Peace race and how hard it was, they were honoured that a team from England was taking part. 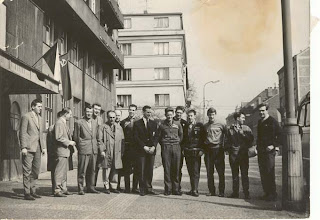 The next day was a “rest day” and I had stayed at this hotel before. There was night club underneath, so I told the Derby crowd and after dinner I joined them. My hero’s were there Kevin Hector, Roy McFarland, Daniels, Webster, Alan Durban and many other good players. Brian Clough was to take over the club when they returned to Derby and they were a bit apprehensive, we had a real good night together and for me it was one of the highlights of the Tour. 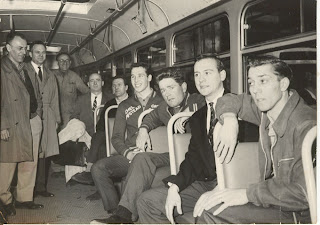 The Tour was run as efficient as ever, the manager and I had sorted the menu’s out for the daily meals and everything was going smoothly, I suppose I was getting used to everything now. That first 1955 tour had been so hard - this one in comparison seemed like a picnic. In this 1963 Tour there was a Scots  and an Australian Team, Arthur Campbell managed  Scotland and right out the blue came Percy Stallard to manage the Australians. After all Percy had been the team manager when Ian Steel won the event in 1952, they had also taken the Team Award overall. Percy found it very difficult to manage this team of Aussies, they resented his dictatorial manner. One thing must be attributed to Percy, all his team finished the race. We finished 14th in the General Class Team,  7hr54min down, the Scots were 15th at 10hr24min and the Aussies 16th at 14hr30min. All six of our team finished. John Woodburn 14th, Daniels 63rd, Ged Coles 67th, John Harvey 74th, Mick Shea 75th and Goz Goodman 76th.


For the  finale and Prize presentation we were taken to a landing stage on the River Spree where 3 luxury river boats, each with a dance band, girls, food and drink, we landed on an island in the middle of the Spree, all lit up by fairy lights etc, it looked and was absolutely brilliant. The Aussies somehow got Percy Stallard completely sloshed and  he didn’t have a clue where he was (he was a tee total too). Apart from a night in the Berlin Sports Halle in 1966 this was the best end of  ‘Tour party’  put on by the Organising Committee. We flew home the following day via Copenhagen. The break up in London came and we departed our separate ways.
Posted by Alan Buttler at 19:40