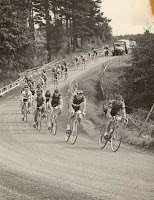 At the end of 1959 I was asked to go to the Tour of Sweden which I accepted promptly, the team was


The Manager was Ken Ryall who had a cycle shop in Surrey and masseur was again that great Finn Arne Lundgren who had been masseur in 1956 and the successful year of 1958 when Stan had won the event.. We again went by train and boat, this time from Tilbury to Esberg in Denmark then by train to Ellsinore, across the ferry to Helsinborg in Sweden, where we had a meal near the Shakespeare Castle.

We were sat outside this restaurant when a van pulled up and the driver got out the van, coming over to to ask if we were the British team, it appears Ken Ryall had made a deal for us to ride frames by the name of “Champion”. As we had got two days before the start. I rigged up my portable bike stand and changed the frames around. I wonder why Team Managers think we have nothing to do.

The race started in Varbreg, home of the famous manufacture “Monark” motorcycles and bikes. Most of the Swedish riders rode for “Monark” in blue or “ Crescent” in yellow. “Monark” headquarters was in a medieval castle and all the race personnel and riders were invited to a dinner held in the jousting Hall, and all the castle staff were dressed in period costume, the food and wine were superior. Even the dungeons had prisoners which looked so realistic, our interpreter drew us over to an underground cell and inside there was two ‘prisoners’ in chains! (We had very good interpreters in Sweden, this one I had met 2 years previous) After dinner came entertainment ending up in the castle grounds with a massive sing song round a campfire. Sitting by me at the “sing song” I was introduced to Kate Jobson who had recently won a silver medal at the Olympics in Helsinki. Her dad was Swedish and her mother English, Kate took me to her training pool and to her home, what a terrific ambassador to Sweden she was. Unfortunately during the winter 1959/60 while skiing in the mountains she fell and broke her back, what a tragedy. She with two more Swedish athletes rode from the ceremonial start to the proper start on the edge of Varberg.

Unfortunately I cannot recall the route we took in Sweden, I remember the road surface was bad as we seemed to be on non-tarmac roads, apart from the towns. The team rode well but nothing like the 1957/8 had done . Bill Bradley repeated his Peace Race win with one on his own in Sweden. The team rode quite well. After the race Ernie Scally and Kenny Laidlaw bought super leather jackets with their prize money. We again caught a boat to the island of Skansen with its live Agricultural Museum.

We caught the Helsinki-Stockholm-Copenhagen-Paris-Rome express quite an experience as we had sleeping apartments, we were in Copenhagen well in time for us to look round this historic city, and of course the famous fair. Eventually we caught the train to Esberg and so on the boat to Tilbury. Quite an interesting trip and better than flying. The team had knitted well to-gether, the two Scotch lads being good comedians, Bill Bradley was a good tactician and “Porky” Perks a good sprinter and Ken Ryall was a good organiser. Bill Bradley was to go on to win quite a few English Milk Races as well as breaking the record for the fastest rider up the “Gross Glockner Pass in Austria, he also finished 10th (no mean achievement) in the 1960.Peace Race.

Back home the business was prospering the 1945 birth bulge allowed us to have a bumper year for bikes mostly for 13-14 year olds, this bulge is still the highest age group for sales of goods even to-day for 50-55 year olds. We had this group buying scooters and motorcycles and the cars and now a few “oldies” are buying the new range of high powered motorcycles. 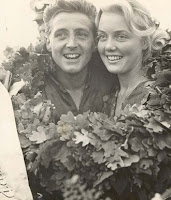 Early 1960 saw us selling quite a few motorcycles, scooters and mopeds to “L” drivers. We would not let anyone away from our shop unless they could handle their machines fairly reasonably and we would give these riders instruction in a quiet side street next to our shop, The procedure we adopted in this learning was to make the customer familiar with the controls especially the throttle/clutch in bottom gear, then we would take them on the pillion and after a few splutters they were off on their own as soon as we deemed it proficient.

At the corner of the street near the main road a new family moved in and on cold mornings the young lady of the house would take pity on us and made us hot, milky coffee to keep us warm. Little did I know that I would fall in love with this girl and after much, much heart ache came extreme pleasure. (We came to-gether in 1972 and were married in 1977. A complete book could be written on this period alone but it would be shelved in the ‘Fiction section’) !

Pete, one of my brothers-in-law had set out early in the year with two friends on a European trip which would eventually finish up at the Rome Olympics, where they had bought tickets for the Opening Ceremony and various events including “Cycling”. Three of them set out, but after crossing in to Yugoslavia from Bari to Split one of Pete’s companions had to fly home due to his father being seriously ill. In error he bought all the tickets home, he had no idea how to get the tickets back to his companions, and so to avoid wasting them gave us the tickets.