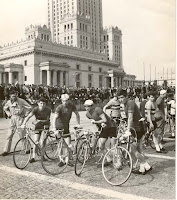 The year was flying by, late in August 1962 I was invited to the “Tour of Poland” Arthur Maxfield was to be manager. The team was,

We now raced under the banner of Great Britain. About a week or so before we left for Warsaw I had a phone call from a lad from Wolverhampton who had obtained my telephone number from Hugh Porter. His name was Alan Hodgetts and he had read in “Cycling” that I was going to Poland. It appeared Alan a student, had been on exchange visit to Warsaw and had met and fell in love with a Polish student by the name of Maria. On Alan’s return to England they had corresponded and attempts made to get Maria a visa for her to visit the U.K. Things in Communist countries were very difficult then and she was not allowed out of Poland. Their romance had blossomed and they wanted to get engaged – and this is where I came in, I was asked to take his engagement ring and give it to Maria who would meet us on our arrival in Warsaw. 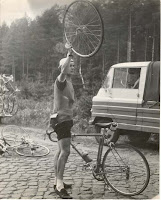 Later that week I had business with Percy Stallard in Wolverhampton and arranged to meet Alan when the ring would be handed over. The day soon came when were to depart for Warsaw. Much to our consternation we had the same old “Dakota” we had flown in 1955! The plane was 10 hours late leaving London, arriving in Warsaw in the early hours of the morning. By the time we arrived Maria was dead tired having waited all day and part of the night for us. She escorted us on the coach and took us to our hotel, we were very thankful that she was there because no official had waited for us. Anyway on the bus I got down on one knee in the time honoured fashion and proposed to Maria on Alan’s behalf and fitted the ring, to the delight and amusement of everyone on the coach who applauded. Whilst we were in Warsaw, Maria acted as our interpreter and made a very good job of it too. 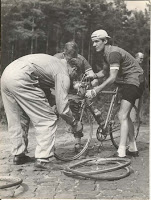 The Tour started from the “Palace of Culture” this was a ceremonial start, the start proper being on the outskirts of the city. Unfortunately my memory fails me for this Polish Tour, but I recall the highlight for us all was a stage win by Billy Perkins, he beat Adler of DDR in a sprint on a black cinder track. The route taken was in Eastern Poland and very close to the Russian border. When we were in Lublin I was asked by an English speaking member of the Polish team if I wanted to visit the Majdanek Concentration Camp, I hadn’t heard of this place before and as he obviously wanted company I agreed to go with him.

What a nightmare it was, it was dusk when we arrived and nobody there; we drove through the main gate, up and down the many rows of huts, and the ovens. In 1944 when the Russians arrived at the camp it held 20,000 people and their presence could still be felt. The camp had been left just as the Russians had found it. The memory will never leave me. 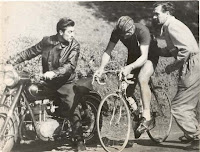 The race went down to a beautiful part of Poland, Zakopane in the Carpathian Mountains where we stayed in a luxury hostel. (Bob Thom, a regular visitor to my shop as sales represntative of Viking Cycles, had told me before about this place. Bob had ridden in the Tour of Zakopane in 1951 and he was full of praise for the scenery, the houses being all wood like an early Austrian scene). We had dinner at Rzeszow and then there was a torch light procession to the railway station where we caught the express to Warsaw, it was very impressive all the large crowd with naked flame torches, a brass band proceeded us.

The race finished in Warsaw where we were met again by Maria. All the race personnel had a night out in the old town, (then being restored after the German massacre in 1944). The Hotel was called the “Green Frog” prizes were presented, we left Warsaw in our favourite “Dakota” the next day .The team had ridden very well and had won quite a few prizes, some of it money Polish zlotys. The currency was invalid in England so I took the lads to the duty free Russian Shop which I had found on the 1958 Warsaw Berlin Prague trip with Tommy Eglestone. We also got a few press photos from Novy Platz newspaper office.

After three weeks together, team break ups in London always seemed a sad affair. The first meal we had on landing from Poland (where the food was not to good) was tomato soup, followed by full English breakfast and mugs of good English tea. On the train from St Pancras I went to the dining car and was directed to the 1st class. There was only room for one more person I sat with this gentleman who turned out to be none other than the ‘trouble shooter’ Sir John Harvey-Jones he was then head of British Steel and we discussed Stanton Ironworks, his views were very interesting.
Posted by Alan Buttler at 20:09