Time for the ‘Scottish Milk Race’ was approaching fast. My participation as ‘blackboard man’ was established and – so successful the motorcycle marshalling of the previous year – I was again invited to formulate a team which was to include 2 car drivers. This time we had Ray Finch, an Essex police motorcyclist. (We had met him on the ‘Grand Prix of Essex’ which starts and finishes in Halstead, he had clearly enjoyed the race and indicated that he would like to be involved on future events), John Cooper, Mick Rose, Jim Rushton, our mechanic Robert, and my nephew Alan. Rex Withers and Aubrey Smith came as team car drivers; Mick, Aubrey and Rex were Nottingham traffic policemen, and so together with Ray we had a highly professional, experienced team.

For the unacquainted, the role of the ‘blackboard man’ was to provide and relay vital information to the racing cyclists, team managers and informed spectators, (we didn’t have the benefit of radio communication). Having the speed and manoeuvrability on a motorcycle he moves up-and-down, back-and-forth the whole of the race taking time checks and rider numbers; writes this information on the blackboard and so displays to the race as a whole what was happening. For instance, there could be a break-away of 1 or more riders, the chasing pack would not know how far ahead the leaders were without the ‘blackboard mans’ information (or even sometimes who were in the ‘break-away’!). A tactical evaluation would then be made after seeing the blackboard.. So a possible entry on the blackboard could be:

1,12,15
1m 16s
57
indicating that 3 riders, numbers 1,12,and 15 had a 1 minute 16 second lead on the main group of 57.
To-day, even with the advanced technology of communication, the role of the blackboard man is crucial in mountain stages of any race. The blackboard man, riding pillion, is very prominent in the Tour de France and his information can be seen clearly on the TV screen – the camera sometimes zooming in.
Again memory fails me- if only I had kept all the notes given me from the Race officials. I do remember having to talk rather sternly to the Rex and Aubrey, the 2 policemen who were driving the cars, these clowns were – embarrassingly - bothering the race director for their spending money just prior to the start of the first stage, you would think they had not any money with them. They received their pocket money the next day as we all did. All the motorcycle marshals performed exceptionally well and had a rousing reception at the final dinner held this particular year in Ayr. 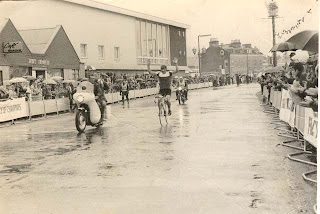 I had one embarrassing moment, during the middle stages, we had to come down from Aberdeen to Kirkcaldy which meant having to cross over several main roads. At one particular cross road I stopped to take a time check, opposite me in an unmarked car sat the Chief of Police, he came across the road to speak to me and, as he was asking about the race I could hear the sweet sound of Jims Triumph Tr6 Trophy coming along and flat out. I gave him the all clear sign, he throttled down only slightly, four more marshals came by at the same speed, no cyclists had yet appeared although there was a break, hence the need for our marshals to get to the next danger point. The Chief said to me
“Did you say you were on a cycle race? I thought it was a motorcycle rally” he was OK after I explained the position, and eventually the cycle race proper came along. “Keep up the good work” was his parting shot.
Our accommodation and food was again of the highest, the communal evening, meals and prize presentation given by the Mayor of each stage finish were as always impeccable. (Whilst we were on the Scottish Milk Race, Dave Miller of Kilmarnock invited us to marshal his “Grants Whiskey 3-day” race held every Easter around Girvan, we accepted the invitation and so followed a few cold rides up to Girvan for the next year or so).
We returned home on the Sunday, no mishaps, but always a race ! Work started on the Monday now we were coming for Aug 1st rush again, we sold a good quantity of new motorcycles and we were as busy as ever, Roy Pidcock and Steve Waplington doing a good job whilst we were away, it seemed much longer but we were only away for Wednesday, Thursday , Friday and Saturday.
Posted by Alan Buttler at 10:32

I rode the 1969 Tour of Scotland (I was 19!) in the South of England team with John Varley, Mick Wishart, Paul Newbury and 2 others whose name I forget