123km was the stage next day, taking us  from Fez to the Spanish Moroccan town of Tetuouan. This city was a beautiful place with tram cars running, just like Madrid. Unfortunately we were again assigned to a camp this time a Spanish Foreign one. After showers and massage we decided to put on blazers and flannels and go into Tetouan to a posh restaurant for a meal (we had won the money to afford this in primes). We had a great time, very restful and miles away from the race atmosphere. Sports T.V. came on in the restaurant and all our team was featured, we were overwhelmed by well wishers and people wanting autographs, just the fillip the team wanted (we had won no prizes that day). Ahmilod came too he was well part of our team now.
Stage 12 - Tetouan to Larache


We all felt very relaxed after our evening away from the race environment and ready for the twelfth stage, from Tetouan to Larache, Dave took the early primes, we finished all five in the top ten the race being short at only 102km.
Stage 13 - Larache to Rabat
Then came the most lucrative stage of the race in terms of remuneration - Larache to the capital city Rabat. The event started OK into a strong head wind. Suddenly we noticed a big fight going on between the Moroccan riders and the Continentals including the Algerians, Geoff Wiles dropped back to our car to tell us that the Moroccan champion El Gouch and his team mate El Farouki were away and the rest of the Moroccans were impeding the chase, the aggression got so bad that the French race commissar stopped the event, meanwhile the two Marocs were allowed to go on.
All the Team Managers were called to a strike meeting, the result being to let the two Marocs take the stage in to Rabat (for their prestige sake) the rest to ride neutralised until 10km to go then race so that the large crowd in the stadium would be entertained, this worked quite well. I cannot remember how our lads finished but were not disgraced. After the race, our team seemed to dawdle in the showers as did the Poles and Yugoslavians.

When we reached camp for the meal, we sat down at our places marked by a Union Jack and waited to be served. We waited about ten minutes with no activity. I decided to go in the kitchen to find out what the delay was, only to find that the other teams had eaten the lot, there was none left. I promptly saw the Organiser and he promised to take us to a restaurant in Rabat. I got our team and the Poles and Yugoslavs together, we borrowed the large Coca-Cola van, and started for Rabat with an official who was to choose the Restaurant. We went straight through Rabat (quite a big city) and we were wondering where he was taking us, suddenly we turned off left in a  forest and up a rough track, finishing up at a big marquee, to our utter amazement it was a United Nations relief camp, the organiser had phoned the camp adjutant  and they had prepared for us a most sumptuous meal, in fact the best we had in Morocco, absolutely unbelievable! We lost no time in telling the other teams of our good fortune. During this stage Geoff Wiles was fetched off his bike by a Motor Cycle Marshall, that is how bad Marrocans wanted to win this stage. 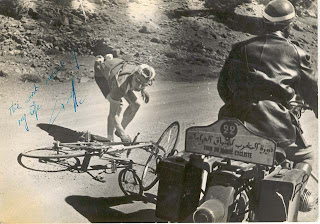 1968 Tour Morocco, geoff Wiles knocked off his bike by a police motorcyclist!
Stage 14 - Rabat to Casablanca
The last day dawned, we were to travel from Rabat to Casablanca 212km on an undulating, good surfaced  main road and we won several prime prizes. The road ran alongside the Mediterranean and it was quite bracing. Soon the buildings of Casablanca came in to view and appearing from nowhere at the rear of the group was a growing number of youngsters on mopeds. The police tolerated these lads until about two miles from the stadium when we were suddenly directed down a side road. Then the police quickly pulled a pole across the road causing the  moped lads to crash, no half measures in Morocco! 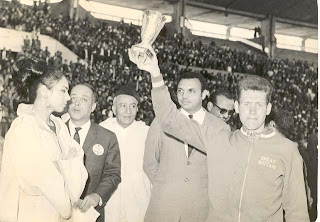 1968 Tour Morocco, Pete Smith with the King of the Mountains Trophy
The race finished on a small shale track - we were well up. The prize presentation took place at the stadium with Pete winning the King of the Mountain trophy presented to him by ‘Miss Tunisia’. Geoff Wiles won the Green points Prize. Mr Frank Barber came to see us in the evening, we were now ensconced in the ‘Atlantic Hotel’. Frank picked us up after our dinner so, donned in our best bib and tucker, he took us to the British Embassy where the staff and the Charge d’ Affairs gave us a marvellous time. Frank collected us again the following morning and took us down to the foreign Consulates private beech. We could not believe our eyes, there were straw roofed bars and beech huts, volley ball and tennis courts, a great restaurant where we were invited to stay for lunch and dinner, the staff could not do enough for us. A wonderful end to a marvellous Tour, thanks to Frank Barber OBE., Legion d’ Honour (Italian).
Epilogue
Looking back I remember one aspect of the race, no one could find out how we always had ice cold water for our riders at the end of these gruelling stages. Bert had brought with him a large canvas bag with strong handles, we filled this every morning putting in the appropriate water purifying tablets which Kathleen had provided for us,  Bert then hung the bag on the front of the car and air passing by did the rest. No one worked harder than Bert, he was a great help to me knowing that I could leave him alone and everything would be OK. Our Arab driver was also first class, nothing was too much trouble for him. We also had mutual help from our ‘Tour de France’ team mate Andre Chenal  and his French team boss Robert Oubron. We had made good friends with the Polish, Yugoslavian, Tunisians and Algerian team officials, and we would co-operate again in the forthcoming Peace Race. There were only three commissars on the race, one French and two Moroccans , slightly different from our ‘Milk Race’ where there seems  to be more men in blazers than there are riders (this is my own opinion looking from the outside as I was never on the English Milk race). 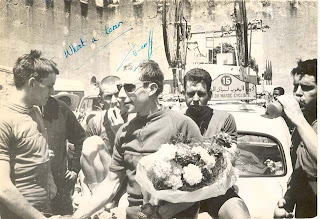 1968 Tour Morocco, Brian Jolly, Geoff Wiles, Pete Smith and Andy McGee
The only blot was that the prize monies that we had won was withheld from us, the reason given that it was Easter Monday (the day of our scheduled departure) and the banks were shut. Bert had made good friends of the two Moroccan ‘baggage men’ he gave them 20 Players cigarettes each day and their assistance went far beyond what was required of them, our bags etc were taken to  our hotel rooms and Bert was looked after like royalty, these two finding him a room to maintain the bikes, all other teams had to find their own. (We were to meet up with these two again in 1970 in the ‘Tour Algeria’ they had big grins on their faces when they saw Bert and I, they were now calling themselves the ‘Baggage specialists’ - quite right too). During the race, prime monies were presented at each stage dinner, other teams gave there winnings to the race authority for safe keeping, we opted to keep ours and a good job we did too because that would be  the only prize money we had. 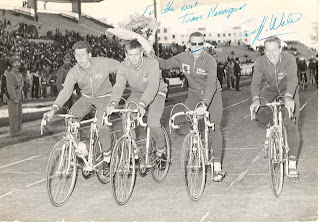 1968 Tour Morocco, the triumphant foursome in Casablanca
This was the most successful team I was to go with, we had won just over £2,000 which was an excellent result. We flew home to Heathrow and in the airport we had the ‘VIP’ treatment, press and T.V. people were there, we appeared on the BBC ‘To-night’ programme, the strike on the road being of interest to them. We were also on radio the next day. This was the best homecoming yet. Splitting up this team was a sorrowful happening, we had been away nearly 5 weeks.
Posted by Alan Buttler at 23:38