The next stage was from Marrakech to Beni-Mellal 196km which was quite a long one but reasonable terrain. After about 50km one of the Swedish riders (Joseph Ripsel) punctured, Pete Smith taking our collusion too far waited for the Swede and paced him back to the group. I thought ‘that’s torn it’ and I was right, the French commissar rode along side me in his official car, he handed me a rule book with a piece of paper marking the rule regarding collusion we were fined 150 dirham for this. We were lucky not to be fined more. 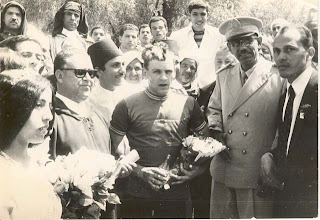 1968 Tour Morroco, Brian Jolly
We started winning again, Brian winning his second stage with the other four well up. Accommodation here was bordering on ‘bad’ we were in an ex-French Foreign Legion Camp, pick your own mattress and blankets (back to sleeping in track suits a la Tunisia) good job we had bought with us the extra food, because almost all the European riders had slight diarrhoeal  problems, we were able to suppliment our diet. The evening meal was very late causing all riders to eat bread and mustard, when it did eventually arrive it was alright (this had meant my going in the kitchens to rustle things along). For breakfast we had loads of toast and honey.

Ben-Mellal to Khenifra 125km was the next stage,  Pete won the mountain prime at Ouaoumana at 3000ft - Dave Nie had won the prime at Kasba Tadla. As far as my memory goes this stage was uneventful our lads finishing in the main bunch. The French Foreign Legion barracks here at Khenifra had to be seen  to be believed. The toilets were  on four floors with a steel staircase between, if anyone used the lower toilets you were showered with urine from those above, terrible happenings. The food whilst plentiful was badly cooked. 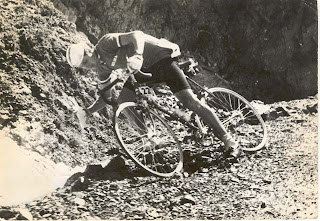 1968 Tour Morocco Rudy Valencic (Yugoslavia) fills his bottle from a mountain stream
Out came our rations once more, we borrowed a Primus stove from the French team who were also supplementing their intake, Bert had bought in Casablanca a crude electrical device which you plunged in a bowl to heat water or soup, so we had tinned chicken and soup and French bread to complement the race food. I washed the daily feeding bottles with Milton (as in Tunisia) we had fresh oranges for the bottles and one of water, Kathleen again to the fore had given me a special juicer for the oranges. Shoes were cleaned, washing and drying done, was becoming a real soigneur. Bert worked well on the bikes and we had no mechanical trouble, we were a good team and in high spirits.

The route from Kenifra took us to the historic town of Meknes 151km hence. Dave Nie took the prime at  M’rirt and also at Azrou. Pete won the 5000ft mountain prime at Ifrane  in fine style. None of our riders were in the first twenty in the bunch sprint in to Meknes, finishing in a fine stadium. Accommodation and food improved here, after yesterday this did not take a lot of doing, but it was much more civilised here in Meknes.

The ninth stage was time trial, 50km from Meknes to Fez, we decided that as we were well off a ‘general class finish’ to take our time and save our strength for the tough stage from Fez to Oezzane, Brian Jolly was in terrible trouble with diarrhoea having to dismount quite a few times, I suggested he retire but he would not hear of it, he caught the bunch after each bout. In Fez we were met by an English couple, after exchanging pleasantries they asked if we had any diarrhoea problems, we obviously answered in the affirmative. They then produced a phial of powder telling us to put a teaspoon full in just a little water and then swallow. This stuff was magic cured us in a few hours (I was to take this product on all races in the future). Food here was better and the accommodation was fairly good. The English couple called at the camp in the evening and we had nice chat.

The tenth stage from Fez to Ouezzane was the most successful for us in the whole Tour. Pete had jumped off the front to win the 2000ft mountain prime, he now had just under a minute lead. He was riding comfortably so I advised him to carry on, his lead became 1min41secs then it dropped to a minute, he then put on the pressure on the undulating road and with his Time Trial experience in England he was off, , Pete won the stage by five minutes, the 2nd rider in was Dave Nie, Brian Jolly 4th and Geoff 6th, Andy finished in the main bunch. We were all  ecstatic, the only problem was we had reverted to French Foreign Legion barracks once more. We again supplemented our rations but they were now dwindling fast. Our driver Ahmalid took us to a small shop where we were able to buy honey, jam and tinned chicken etc, we could not afford to go hungry as our winnings in dirhams was quite substantial. 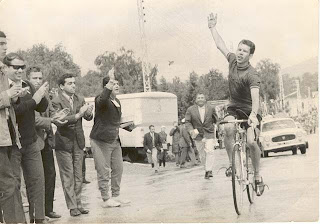