We duly left for Berlin for the Peace Race, Neil Walsh joining Bert and I. What a change we could see in Neil, he was almost an alcoholic, sad to see. The accommodation in Berlin was in the 1936 Olympic Games Village, and quite good. The team met and sorted out the menus for the next fortnight or so, I kept the ticket books to present to the waiters (see previous years). My heart was not in this race, Geoff was a bit down due to his non-selection for the Olympics, and the team had somehow lost their Moroccan edge. Due to our success in Morocco we were feted by the TV, radio and press. But this time we did not live up to our previous successes.
We were given a rousing welcome at Schonefeldt airport at Berlin, non other than Tave Schur headed the party, he had a long chat with Geoff. The race started in a large football stadium in East Berlin (the 1936 Olympic Stadium is in West Berlin)  the race route was out to Frankfurt-on-Oder and returning to Berlin to finish in the stadium. Disaster hit us on the first day Pete Smith, touching a wheel in the big bunch sprint, fell breaking his collar bone. A night in hospital for Peter, he was flown home the next day. We hoped for better in the next stage which was from Berlin to Halle, 189km. All the team rode well Brian and Geoff finishing in the first twenty , putting them in the prizes. Doctor Mirek Slavic made his nightly visit checking up on our team, he had become a great friend of ours.
Halle to Suhl was the next stage 194km, Suhl was a new town to me. All the team finished in the main bunch, the Germans were doing well, their Klaus Ampler was leading on General Class, Frenchman Duchemin (one of our old pals from Morocco) was second and France led the team competition. Bert had settled down well doing the bikes, we had again been given tyres by the Czech Barum Co, these were very well received. We gave the Barum rep a bottle of Scotch as small recompense. Whilst on the subject of bike mechanics Holdsworth had given us twelve new chains and freewheels which Bert fitted before the start. Rica, through Kathleen, supplied us with Radium massage cream, Iodine oil and of course their “Super Plenamin” multi-vite tablets, and also we had the now famous and much acclaimed Siopel Cream for ‘bums’.
The next two stages were split, everybody hates these, the first part was an individual Time Trial of 30km from Halle-Ilmenau, the weather which had been good changed for the worse - it poured with rain and another disaster hit us which very nearly had Bert and I in tears. The new chains that had so kindly been given by Holdsworthy seized up in the rain, every time any pressure was put on the pedals the chain jumped a few teeth. You can imagine how our riders felt. At the end of the split stage Bert and I contacted our mates the Rumanians, we managed to get eight Brampton chains from them in exchange for our Dunlop brass double acting pump. We changed all the chains in between the two events.
The next stage was 170km long from Ilmenau to Aue, the lads were overjoyed with our competence to get the chains, but they had no idea the relief it gave Bert and I. As in the previous year we stayed again at the hospital in Aue, but in twelve months it had been changed to a luxury hotel, ideal for the ‘rest day’ that followed. After a short ride in the morning we were entertained by the staff of an engineering works, relaxed all our worries disappeared. Neil was doing an excellent job as masseur, a bottle of brandy keeping him going, he had a real good time at the engineering offices, introducing himself as “Walsh of Glasgow”.
The fifth stage took us back to our favourite city Prague, again staying at the ‘Hotel International’ facilities there are excellent, with a good, heated, well lit room for the bikes (although by now Bert brought along his own inspection lamp). Prior to this however on passing through Karlovy Vary Brian Jolly was involved in a “pile up”, he was so badly hurt the first aid people put him in ambulance, but after they  had bandaged him up he fought his way out of the ambulance, demanded his bike from the back of our car and started the chase back, we decided to let Brian ride at his own pace until he recovered before we sent anyone back to help him and we followed him in the team car till we were certain that he was alright. He gallantly finished the stage riding   50km on his own until we fetched Geoff Wiles back to help him, what a courageous ride that was, he received the meritorious award for his bravery. 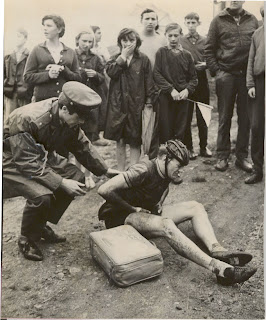 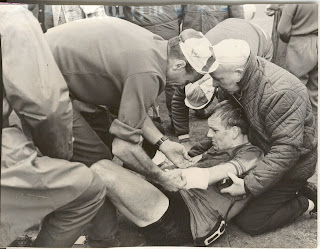 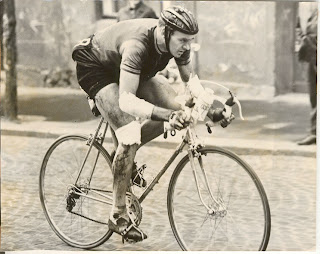 1968 - Stage 5 Brian Jolly crashes and gallanty continues the race
Four days in Germany had come to an end, we were now looking forward to four days in Czechoslovakia where historically British teams had fared well. Sixth stage Prague-Hradek Kralove (of Graham Greene fame) was only 145km - I thought the hills might suit our team  but we all finished in the main group. The Czechs were coming to the fore now they were on home ground, Dolezel and Konecny doing well, but the DDR team were winning with Klaus Ampler and Peschell in good form, Huster and Mickein backing them up. Our ‘team mates’ the Swedes were having trouble with their Kurt Sauderland and Joe Ripsel struggling. Our other friends from Morocco weren’t doing too bad Morciano, (he did not go to Morocco as his five team mates did) winning a stage.
Stage seven came along and this was a circuit road race starting and finishing at Hradec Kralove  119km a big bunch contested the finish, our team were all there, nice to get back to same hotel not so much hustle. Good food and comfortable lodge here at Hradek Kralove. A short ride in a coach the next  day for the start at Vamberk going towards the industrial part of Czechoslovakia to the large city of Gottwaldof finishing the suburb Octrovice .We had good accommodation at Gottwaldof, food also was first class, mechanic and masseur facilities were also of the best, Czechoslovakia always in front on the course. 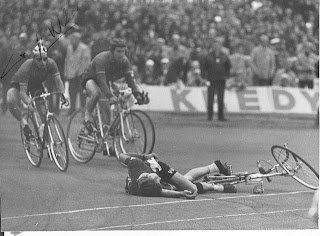 We were still only just scratching the service as regards prize money, but at least the team were all finishing the stages. Rest day beckoned at Karvina going from the large city of Gottwaldow to reach there. All the team again finished although Andy McGee was well down. I helped Bert to do the bikes the night before the rest day so he could relax and have a lie in. We all  went a little ride in the morning, just enough to stretch the riders legs, returning then for a light massage and lunch. In the afternoon we were collected in a coach and taken to a coal mine, where we were handed boiler suits and headlamps and down the mine we went.
Living near Nottingham and Derby – in coalmine country -  you would have thought that at least Bert and I would have been down a mine, but no this was our first. It was quite interesting, we came up and had baths in the super pit head facilities, then we were entertained by the office staff, Bert who was very shy at the best of times ‘fell’ for a school teacher, we were not to see him till very late that night. We all enjoyed the meal and wine there, again taking our minds from the hard race. 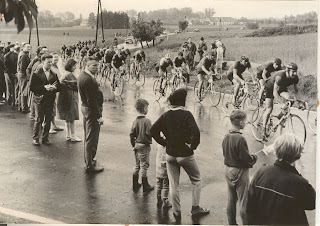 In to Poland the next day to the coalmining city of Katowice from Karvina in Czechoslovakia, the race finished in the marvellous stadium which in 1955 was just a heap of cinders. Now there was a theme park and an overhead railway which seemed to run for miles, the transformation from 1955 was hard to believe. Good facilities (for Poland) were had, the lads were still there but winning little in prize money. The eleventh stage next day took us to the ancient walled City of Krakow 123km, this stage being relevantly short, finished with fast bunch sprint, and all our riders finished OK.
From Krakow on the twelfth stage we went north to Rzeszow, (we were there in 1962 with the Tour of Poland team).  I cannot remember any happenings at this place, but the next stage was Rzeszow to the eastern Polish city of Lublin 192km, again memories came back of my being taken to that horrific concentration camp at nearby Medanek in 1962. We had a nice hotel here, better than 1962, and the food was good too, and all the team finished once more.
The final day at last arrived and we were all ready for it, the stage today was split into two, the first part being a 49km Time Trial, Roy Cromack excelled himself in this finishing in the first ten, the last stage in the afternoon to Warsaw was from Radum only 123km finishing in the magnificent stadium on the other side of the river Vistula at Praga. The winner this year was Axel Peschel (DDR) from Karel Vavra (CSSR) and 3rd was Jan Magiera (Poland). Poland succeeded in taking the Team prize.
As before  the washing was done by the race laundry and I had told the lads not to put any wool clothing in the wash. Roy Cromack unfortunately put in an expensive wool jersey and much to everyone’s amusement it came back to fit a five year old kid, he was livid. The prize giving and dinner at the Hotel Warsaw was a tame affair for us, the lads were a bit down not having won much. I did assure them that they had done well to finish at all, but we all had a merry time until the early hours with a little help from  Hungarian champagne. We flew home to Heathrow the next day. So ended my eighth and last Peace Race.
A lasting memory for me on the 1968 Peace race was the new freedom, which unfortunately was not to last long for Premier Dubcek’s Czechoslovakia, what a difference the lack of Communism had made, we were all disappointed when the Russians invaded from Kosice where we had been in 1957 - a sad time for them all.
Posted by Alan Buttler at 23:40

This is a very useful post, thank you! I agree that innovations are the most important thing for most businesses because with today’s fast-changing world we need to stay on top of the changes if we want to survive.